A Small Life by Suki the life model
::  Read from the beginning :: contents  ::  EFL/ESOL notes for English language learners  :: 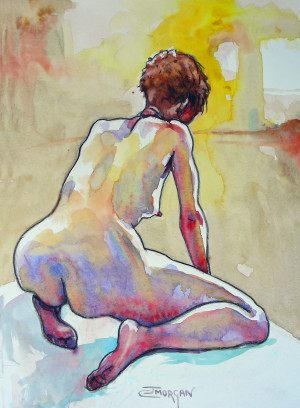 That’s a size 16 bottom you’ve painted! I don’t say. Jeremy perceives me as fat. So he definitely doesn’t find me attractive. At least I’m being paid for some of the important staring into space I do. I tell Jeremy I want more of this work. He says he’ll ask a friend. At break time I chat about what I’m reading. Jeremy chats a bit about Art and Music (he isn’t into literature). As always, there’s no eye contact. I like this lonely walk home in the damp dark. Kicking through this lovely decay. Until unexpectedly my womb starts tipping itself out. A deluge. I have to scurry. What would I have done? I hurry into my empty cottage (empty of my manuscript). I sit on the toilet for ages. I am at a loose end, so I work on a poem.

She would make him sit just so: stripped bare,
muscular, circumcised, white skinned, elegant, shivery;
would rip masking tape from a roll to mark round his toes
on the carpet, round his hand on the chair. This would stop him from moving. He’d know
he must strike this exact pose again and again.
She’d draw his face, full-lipped, his strong chin blue
like Desperate Dan’s, big eyes a child’s not a man’s, would pay him a better rate than he is paying her
to sit unclothed looking at a cactus on his sill,
hands on her knees, feet planted at such an angle
he’ll see it, glancing up from his easel – ruby lips parted, streak of ochre down his trouser leg,
one fist needled with little brushes, the other hand
darting – see the uncontrollable droplet of
menses roll down her inner thigh. Window-glass marble black. Night sky blocked out
by the room’s reflection in which his head cocks
like a tom-tit as he measures an earlobe,
triangulates cheekbones, turns her soft face hard, as the slow red tear plops onto her chair-seat;
as, behind the canvas, screened off,
one foot taps to the crescendo of a sonata,
his elbows pointing out then disappearing.

1. See HERE the fruits of a six-hour pose in my studio with three doughty lady artists – Lois Brothwell, Helen Wheatley and Linda Gibbs. Book Suki’s Life Room ([email protected]), £30 per two hours for model, studio, and brioche rolls. Bring five pals, that’s a mere fiver each. Come to Bradford! Yes, from abroad – where’s your get-up-and-go?
2. On Monday 17 June 2013, 6pm, please come to a multi-media ‘happening’ incorporating UNDER THE GAZE, with myself, Helen Peyton and Bel at Grassington Arts Festival in the Yorkshire Dales. Nearest airport Leeds-Bradford. I’ll get Bel to pick you up.

Artist of the week

COLIN MORGAN moved up to northern England from Bristol forty years ago for a Graphics degree (Preston). Loved the rugged landscape; stayed. Enjoys painting in many mediums and styles, however life-drawing always a passion – been doing it for fifty years on and off. Has exhibited in many English galleries.
[Return to homepage]